Southwest Colorado is a beautiful, but sometimes dangerous place to live and explore.

Search and rescue missions on mountain peaks are an unfortunate reality, but for first responders in San Miguel County, a new helicopter is changing the game.

On a rainy afternoon, an Airbus H-125 helicopter takes off from the Telluride Regional Airport.

The helicopter is the newest member of the San Miguel County Sheriff’s Office and it is to be used for search and rescue missions and fire spotting.

“It is a high performance, single engine helicopter, primarily designed for law enforcement and search and rescue work,” said Derrell Egner, one of the helicopter pilots.

“Primarily this one is capable of carrying fairly large loads, either internally, or under a swing or a hoist. It’s just unusual in that it’s such a powerful helicopter that it’s able to carry large loads. In fact, it can lift more than it weighs.”

The H-125 is built to perform well at high altitude. It’s the only model of helicopter to land on and take off from Mount Everest at 29,000 feet.

The aircraft was recently gifted to the sheriff’s office by an anonymous donor. San Miguel County Sheriff Bill Masters says the helicopter will be a game changer for their work.

“Getting our rescue teams quickly into the field, evacuating injured people, and searching for those people who might be lost or we know they’re injured, but we can’t necessarily find them,” said Masters.

After lifting out of the airport, the helicopter heads southwest, towards Wilson Peak and El Diente, two 14ers near Telluride, and the location of many search and rescue missions.

Skirting fields of scree, following creek beds, and peering into forests, the helicopter provides a view you could never get on foot. But it’s not just the vantage point that’s an asset, it’s the time.

“I would think the easiest way to explain it is what would normally have been a four to six hour to get to a typical hiker is more like 20 minutes now. As you know, about the golden hour, people that have fallen, or certainly any kind of compound fracture, bleeding events, you’re going to have a much better chance with the helicopter than having to drive yourself or hike yourself up that locale,” said Egner.

The helicopter touches back down at the airport, on this flight, there weren’t any rescues to conduct or fires to put out, a sow and three cubs is the most exciting sighting.

But for those who do have the unlucky fortune to need a rescue, the Airbus H-125 will hopefully make a tough day, a little bit lighter. 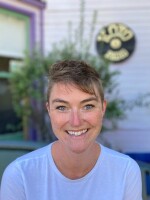