Colorado Parks and Wildlife Director Dan Prenzlow has been put on administrative leave following reports of him using “inappropriate comments and interactions” at a conference in Vail. Dan Gibbs, executive director of the state Department of Natural Resources, said the agency is investigating the incident.

About 600 people were in the audience at the 2022 Colorado Parks and Wildlife Partners in the Outdoors Conference on April 19 when Prenzlow attempted to thank a Black co-worker for helping to organize the conference and shouted, “There she is … at the back of the bus … Aloe.”

Aloe is Alese Lee, a statewide partnerships coordinator with CPW. She has been at CPW since January but has worked in outdoor recreation and education for nearly a decade. Her experience ranges from working on a trail crew to management positions. She said she is used to being the only Black woman in the room at industry events.

Lee, who was on the team that planned this year’s Partners in the Outdoors Conference, said the event was something she was looking forward to.

“I was so excited because I knew there would be a lot of really cool people to talk to and network with,” she said. “But at the same time, you know, just being conscious that, you know, this is Colorado and this is a white-man industry. The racism that I experienced, the level that I experienced it at was definitely not something that I planned for. … I did not know that the director would get on stage and say the words ‘back of the bus.’”

Lee said Prenzlow’s remark was not the only instance of racism she saw at the conference. She points to actions by Dan Gates, chair of the Colorado Wildlife Council, whom she called “a known racist” in a letter to Gibbs and Gov. Jared Polis.

Lee wrote that Prenzlow “did not thank me for planning the conference — he thanked my predecessor, Dan Zimmerer (who no longer works at CPW). He also thanked my supervisor, Jen Anderson, by addressing her as ‘gal.’ When he was confronted for not thanking me or acknowledging my efforts, he brushed it off as if I don’t matter.”

She told APR her co-workers in the information and education department of the agency have been warm and welcoming. Outside of her department, she said, “I am a unicorn” as one of few Black women at CPW.

“Not going to lie, when I leave our office, and I go out into the other parts of the CPW office, my energy shifts because I don't know those people like the people that I work with in our offices,” she said. “But yeah, I walk past people's offices and I wave and they're not waving back at me. They're just looking over their computers. And that's just the reality.

“You know, I'm very happy that I'm hired into a department or a section that isn’t obnoxious. But the reality is that CPW does have that climate in that area, and that's the part that we need to focus on reforming.”

Lee’s letter calls for Prenzlow and Gates to be replaced.

In the interview, she said CPW needs to bring in outside consultants to investigate attitudes and hiring practices within the agency, especially among management.

Lee said that as of Tuesday, her letter to Polis and Gibbs has more than 400 signatures of support. Nearly 150 of those signers have a personal statement attached.

“The support is so overwhelming at times. People are really showing up and sharing their stories. Not only just in support of me, but just giving their personal stories and testimonies, and I think that’s powerful,” she said.

In a statement, Polis’ office said it supports the DNR’s ongoing investigation into Prenzlow’s conduct.

Neither Prenzlow nor Gates has responded to a request for comment. 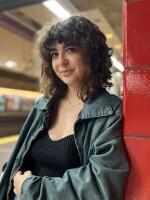 Caroline Llanes
Caroline Llanes is a general assignment reporter at Aspen Public Radio, covering local news and City of Aspen-based issues. Previously, she was an associate producer for WBUR’s Morning Edition in Boston.
See stories by Caroline Llanes
Sign Up