In the midst of an ongoing national fight about the future of the Affordable Care Act, also known as Obamacare, a measure to replace Colorado’s health care exchange is igniting passion in Denver. On Feb. 7, people rallied outside the State Capitol to protest repealing the Affordable Care Act, while inside the capitol, the Senate Finance Committee held a hearing on Senate Bill 3, the Repeal Colorado Health Benefit Exchange Bill.

The progressive group Save My Care is organizing a cross-country bus tour, and said that more than a half million people in Colorado would lose healthcare coverage if the Affordable Care Act is repealed.

Kathy Henson attended the rally. She’s from Thornton and said her husband is a custom home builder. Before the Affordable Care Act -- and Colorado’s exchange, Connect for Health -- they paid $1,000 monthly in premiums for their a high deductible plan. 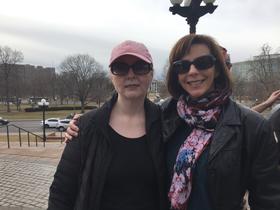 “We felt always on the fringe, and always on the verge of losing our health care,” said Henson. "And we are no longer spending more than our mortgage on our healthcare for the first time."

The sponsor of SB 3, freshman Sen. Jim Smallwood (R-Parker) said his measure is not an indictment of Obamacare, and said he even supports some parts of the federal law. He said the state exchange’s inability to stay afloat financially without tax credits and grants is a reason to discuss repeal.

“Connect for Health, in my opinion, is extremely unnecessarily expensive to the taxpayer,” Smallwood said. “Connect for Health has not proven to be successful per the intent of the original act, which was to increase access, affordability and choice for individuals and small employers purchasing health insurance.”

One of the options on the table is following in the footsteps of states like Oregon, Kentucky and Nevada, which switched from a state-run solution to the national marketplace -- healthcare.gov.

“We commissioned a study that our board did review.  We had estimated those costs being in the $23 million range,” to switch to the federal exchange, said Kevin Patterson, the CEO of Connect for Health Colorado.

According to Patterson, that’s roughly equal to the cost other states have experienced. Opponents argue the cost would negate any potential savings by repealing the exchange. But Republican Sen. Owen Hill of Colorado Springs notes that the non-partisan fiscal analysis puts the cost of switching to a much lower $4 million.

“You’re telling me $23 million and they’re telling just over $4 million,” he said. “How is there $23 million in costs in buying from healthcare.gov instead of Colorado's current website?”

“Senator Hill, welcome to my world” said Patterson. “We're you're dealing with the federal government and trying to do something you think might be a simple process, what you are given in terms of the requirements that are built into your system, because it’s healthcare information.  I'm just telling you what the costs have been for my colleagues.”

The line to attend the Senate Finance Committee’s hearing on SB 3 went out the door. After nearly four hours of testimony, mostly from people talking about the benefits of the Affordable Care Act, Smallwood said several times this his bill wouldn’t change federal law. 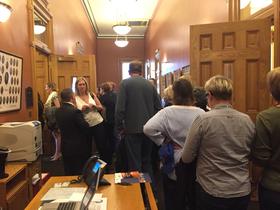 Nancy Hall was one of the many who testified against the measure. She said the bill doesn’t address baseline issues that have led to the exchange’s problems.

“I think health insurance has gotten exceedingly expensive,” she said. “It’s not affordable. There are a lot of problems with the system. However, my problem with this bill is it does not address any of those problems.”

Nationally, President Donald Trump and some Republican lawmakers have pushed their repeal and replace of Obamacare to “end of the year.” But the potential for change is leaving state lawmakers concerned that repealing Connect for Health could end up costing precious time and money.

“Why would we waste all those tax dollars to undo, find out that we’re changing everything at the federal level and then have to redo?” said Democratic Sen. Lois Court of Denver.

“I’m a big believer in using committees to stir out ideas,” said Tate. “I’m glad we’re talking about it now rather than next year.”

Capitol Coverage is a collaborative public policy reporting project, providing news and analysis to communities across Colorado for more than a decade. Fifteen public radio stations participate in Capitol Coverage from throughout Colorado.

Lawmakers in both parties are trying to make it more difficult for homeowners to sue condo developers over construction defects. They hope it will lead to more condo development and lower rents. But despite widespread support for the concept, legislation hasn’t been able to pass in previous years.

We talked about the issue with Peter Marcus with ColoradoPolitics.com and Ed Sealover with the Denver Business Journal.

Law enforcement officers in Colorado would be required to be U.S. citizens under a new measure that cleared the Senate Judiciary Committee on Feb. 6.

Data continues to show that where a person lives in Colorado plays a big role in dictating how much they pay for health insurance. That's because insurers use it to calculate premiums and in some regions it's unusually high. State lawmakers are aware of the problem – but are not sure what the solution is.

"I was seeing upwards of $500 a month," said Sam Higby, a Breckenridge outdoor gear shop employee. He's 35 and healthy, but said on his salary he simply can't afford healthcare.

"It does weigh on me as an active person, being concerned about what might happen out there."