Facing a ‘die off,’ bighorn sheep get airlifted for a health checkup

Researchers are trying to protect a herd of bighorn sheep near Jackson, WY, from pneumonia, which has killed off wild sheep for decades.

A black and white helicopter flew above the snowy open hills in the Gros Ventre Wilderness in Teton County as researchers like Alyson Courtemanch were capturing bighorn sheep on a frigid winter morning.

“This time of year, they should be in their best body condition coming out of the summer and the fall,” said Courtemanch.

Courtemanch is with the Wyoming Game & Fish Department which is monitoring the Jackson herd of wild sheep for pneumonia, an illness that has killed off bighorns across the west and can throw off entire ecosystems.

While the researchers weren’t sounding alarms, they were worried that the Jackson group is due for another die-off soon.

The pneumonia pathogens, Courtemanch said, already live within the herd.

“They’re just lying dormant in their bodies,” she said. “[But] something can trigger those pathogens to take over.”

To assess the herd’s health, helicopter pilots tracked down nearby sheep, which already had GPS collars.

Crew shot down a net, and one member called a “mugger” jumped out of the helicopter, binding the bighorn’s legs together and blindfolding it.

Courtemanch said this kept the sheep relatively calm as it dangled on a rope below the helicopter.

It was then flown back to the researchers in hills nearby, who took measurements before releasing it back to the wild.

“So, we’re looking at the amount of fat that they have on their body to get an idea of how well they did through the summer,” said Courtemanch.

The biologists gather this data before and after the winter, to see how the habitat is impacting the Jackson herd.

One member of the crew, Ben Regan, held down one of the squirming female sheep.

First, he weighed her, and then he brought her over to a mat to take more measurements.

“We start off by getting a temperature,” said Regan.

“That way we can see if the sheep is hot, if the chase time might have been a little bit longer.”

As the helicopter flew overhead, Regan used an ultrasound to measure fat on the sheep.

Then, he checked if she was lactating, to see if she had a lamb.

Next came the tonsil and nasal swabs.

“Basically we’re able to look at what pathogens they have that might lead to pneumonia, which is a big disease that affects wild sheep in the West,” said Regan.

There used to be about two million bighorn sheep in North America.

According to the National Wildlife Federation, now less than 85,000 remain.

Courtemanch said this is largely due to pneumonia, which was introduced by domestic sheep.

Researchers at the University of Wyoming have been studying the illness in the sheep for almost a decade.

Kevin Monteith, who leads those studies, said die-offs from pneumonia happen when the population reaches its carrying capacity in the local habitat.

Recently, the herd had over 500 sheep — a high for the group.

“When we reach those high levels of abundance, that can be tied to animals competing for food which means poor nutritional condition which means one more layer that they’re contending with when you add their efforts to contend with pathogens at the same time,” said Monteith.

Pneumonia struck the herd in the early 2000s and killed about 70% of the sheep.

The researchers said they worry the herd is due for another.

Faced with a potential die-off, the Game & Fish department recently issued limited hunting permits in the fall for the female sheep for the first time.

Researchers said they predict that by reducing the population the herd will become healthier with more food to go around — and they’ll be able to fight off pneumonia.

“It’s near that historic abundance where we often see those crashes, and so we’ve been sort of waiting, wondering if we’re going to see [a die-off].”

The department allowed 16 sheep to be hunted, but less than half of that were actually harvested last year.

Monteith said it’s still too soon to know if reducing the herd has had any impact.

“The reality is, it just simply takes time,” said Monteith.

At the recent Jackson capture, the researchers said they saw red flags.

More lambs have been dying of pneumonia and the sheep had slightly lower levels of body fat, which has been on the decline for the past few years.

Regardless, this herd is thriving compared to another group of bighorns that traverses cliffs nearby in the Tetons.

Those sheep received heightened attention in recent years as development restricts migration patterns, which some environmentalists say is threatening their health.

Courtemanch, with the Game & Fish department, manages both the Jackson and Teton herd.

“You have one herd that’s almost doing too well and that we need to kind of reduce the population numbers, and then we have another herd like the Tetons that’s struggling and not doing very well,” she said.

“So, we do very different management depending on what’s going on with that specific population.”

Researchers will reassess the population of the Jackson herd in February and then decide if they should issue even more hunting permits.

But, on that cold winter day, the captured bighorn sheep get to return to the wild.

“We have finished up sampling a couple of the sheep,” Courtemanch said.

“So,we’re about to release them back onto the hillside.”

The biologists carried a female sheep over to the nearby hill, removed her blindfold and untied her legs.

Within seconds, she took off through the snow, ready to brave the winter ahead. 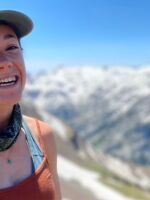 Hanna Merzbach
Hanna Merzbach is a reporter and producer at KHOL in Jackson Hole, Wyoming. She comes to Jackson from Bend, Oregon, where she worked as a freelance journalist and reported on housing and the environment. When she's not working, you can find Merzbach scaling rock walls or backpacking in the mountains.
See stories by Hanna Merzbach
Sign Up