The Austrian-born artist designed the institute’s layout as well as several of its buildings.

But as the center shows, Bayer was also a painter, sculptor and graphic designer, and the center showcases more than 100 of his paintings, collages, tapestries and sculptures.

The exhibit covers Bayer's entire career, with works ranging from his early art-school days in Germany to his later ones in the California town of Montecito, Santa Barbara.

In the years between, Bayer made art at his Red Mountain studio during a 30-year stay in Aspen.

Dick Carter, a Basalt-based artist, was his studio assistant for five of those years. He says Bayer’s time in Aspen is apparent in his art.

“I feel like he was totally influenced by his presence here — there’s no question,” Carter said. “I think the mountain influence was in his work for a lot of what he did, the geology and the atmosphere, the weather, the wind.”

No matter where Bayer was creating or what medium he was using, one constant remains: Bauhaus' influence on his work.

The art movement was pioneered at the genre’s namesake school in Germany, where Bayer honed his craft.

Some features of Bauhaus include primary colors, abstract geometric features and balanced forms.

Bayer would carry this approach with him to Aspen, where he settled in 1946.

According to James Merle Thomas, the first director of the new center, Bayer has "taken that early experimental sensibility of the Bauhaus and 1920s Germany, and he's transformed it into a portrait of Aspen at that time.”

The institute announced Friday that Lissa Ballinger has been named as the center’s interim director as Thomas transitions into a senior fellow role at the institute.

Thomas said Bayer’s take on Bauhaus was influenced by Colorado’s landscapes, with abstract depictions of mountains, beavers, owls and columbine flowers — and it is all on display at the new center.

“For me, these works are just absolutely modernist masterpieces that I think reflect his experimental artistic sensibility, while also grounding us in our natural environment,” Thomas said.

For example, aspen groves inspired him. But in one series, his depiction of aspens, rather than featuring the usual vibrant green, are coated in warm teals, golds and rosy pinks.

In another work, Bayer comes at aspens from a whole other angle — several sets of eyes replace the bark’s iconic knots and twists in a black-and-white collage.

It's impressive to see, in one artist, such variety in style and structure side-by-side, but a multifaceted approach is central to all of Bayer’s work.

The city of Aspen looked a lot different when Bayer arrived here, lured in by Chicago industrialist Walter Paepcke, who sought him out to help design what would become the institute’s campus.

Bayer became the architect behind Paepcke’s vision for a renewed Aspen.

And the center offers an in-depth look at their partnership and how they transformed Aspen into the artistic and intellectual haven it is today.

Steve Chuckovich, too, is a fan of Bayer’s work. He came to town just to take a look at the new exhibit.

“I was familiar with his work, but before, you would get a little bit here, a little bit there, and now all of a sudden, it can be seen in one place,” Chuckovich said.

Before his visit, Chuckovich says he has never seen pieces from Bayer’s teenage years next to ones he made in his 80s.

“I think the surrealist pieces that he did early on were very interesting because they informed a lot of his later work,” Chuckovich said.

Carter said the center shares the story of the man behind the art, and offers a tour through Bayer’s life and career.

“The center is really going to be a tremendous boon to people who will finally understand a lot more about Bayer and see him in a more contemporary context,” Carter said.

The center also plans to partner with regional universities in an effort to share Bayer’s work with the next generation of art enthusiasts. 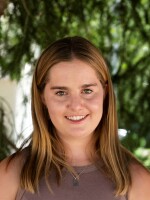