As a result, states now have the power to limit and ban abortions—some states have already done so.

It’s also one of the biggest abortion providers in Colorado.

Reporter Halle Zander recently spoke with Adrienne Mansanares, the executive director of Planned Parenthood of the Rocky Mountains, to get a sense of how their work is changing.

EB: So how is Planned Parenthood responding to the Supreme Court’s decision here in Colorado?

They’re expecting to have more people traveling to Colorado for a number of reasons. First, Colorado Governor Jared Polis signed the Reproductive Health Equity Act into law back in early April, so abortion is protected here for the forseeable future.

And Colorado’s in a pretty central location in the West, so that makes it easier for people to get here.

Mansanares says they’re also preparing by beefing up telehealth services where people can call or video chat with clinicians from home. In Colorado, New Mexico, and southern Nevada, they’re even able to prescribe the abortion pill this way.

EB: So does that mean they’re moving away from in-person services and clinics?

They’ve had a hunch for a while that they might need to prepare for an influx of patients coming from states where abortion is banned or restricted.

And they’re already seeing a higher percentage of their patients traveling to Colorado from Kansas, Utah, Idaho and Texas.

Mansanares says this ruling couldn’t have come at a worse time.

“The cost of gas, the fact that they have to drive so long distances, and there are more immigration stops in the south in southern New Mexico than there have been in the past,” Mansanares said. “Our health centers remain understaffed. There's a big delay in any kind of supplies that we may need if we need to order new equipment. That just slows things down and it creates a more frustrating working environment.”

So as Mansanares says, the lack of abortion care in some states really intersects with all of these other economic trends—making it exceptionally harder to receive abortion care. And it puts a lot of pressure on neighboring states to deliver those services.

EB: Is that influx of people going to impact patients in Colorado seeking abortion care? What can they expect?

HZ: So far, Mansanares says the biggest change is likely increased wait times for appointments. Here’s what she said about that.

“Unfortunately, there may be a bit of a wait,” Mansanares said. “You may be used to walking into a health center and getting the care that day or the next day. We are scheduling patients out, sometimes as long as two or three weeks.”

Despite the longer waits, people seeking abortions in Colorado can rest assured that their rights are protected at this time.

There are reports that some conservative groups in the state have begun collecting signatures to challenge the law with ballot measures.

But Mansanares says that it’s unlikely abortion protections will be overturned in the state.

“The people, the residents, our communities in Colorado have made it overwhelmingly clear, frankly, since the mid sixties, that abortion care is health care,” Mansanares said. “We have a very supportive state and we always have. It becomes this political game, a complete waste of money and a general suck of political will to begin to think that Colorado's going to turn their back on our patients.”

She really thinks those rights in Colorado are here to stay.

EB: So Wyoming is one of the states Planned Parenthood of the Rocky Mountains serves. But it’s the only one with a trigger law that could soon ban abortions, right?

HZ: Yes, and that’s really why the stakes are highest for people seeking abortions in Wyoming.

The trigger law, House Bill 92, only allows exceptions for cases where the pregnancy impacts the health of the mother or the pregnancy was a result of rape or incest.

So doctors and clinicians may have to stop conducting abortions sometime in July.

But Wyoming Governor Mark Gordon still needs to sign it before it can go into effect, and that could happen any day now.

Mansanares says that this law is a big blow to morale.

“I think it does very much alienate, disappoint and anger a lot of people living in Wyoming that they don't feel represented by their state legislator by this,” Mansanares said.

EB: And wasn’t it already hard to get an abortion in Wyoming?

Yeah, it hasn’t been easy.

While they offer telehealth services, Planned Parenthood of the Rocky Mountains doesn’t actually have any in-person clinics in Wyoming.

And certain restrictions there prevent their clinicians from providing the abortion pill via telehealth.

So as a result, Mansanares says many people seeking abortions within the state get them from primary care doctors.

She adds that those doctors don’t often advertise that they perform this service, so it’s difficult for people to know where to look.

That’s why a lot of people seeking abortion in Wyoming travel to Colorado already.

Planned Parenthood of the Rocky Mountains even has something called the Wyoming Abortion Fund, which can help people pay for abortion care if they have financial barriers.

EB: Ok, so what clinics are the busiest right now in our region? And are any at risk of closing?

HZ: Mansanares says they’re lucky and none of their health centers are at risk of closing at this point. She says the front range centers are pretty busy, especially the Park Hill Health Center in Denver.

But she also said every clinic in Colorado is seeing people traveling from other states, even the small ones in Glenwood Springs and Salida.

Albuquerque, New Mexico sees the most out of state patients of any other clinic.

EB: Right. So looking at the big picture—what does all of this mean for abortion care in the West?

HZ: Well it’s no surprise that more traveling will be involved for a lot of people. And certain populations are more likely to face barriers.

“Bans that go into effect in states and barriers to any kind of health care have a disproportionate impact on black indigenous people of color, people that live in rural communities, people living on low incomes,” Mansanares said. “And the impact becomes that much more devastating on communities when we have government policies that restrict access to care.”

There are funds set up to support these individuals, but it’s yet another hoop to jump through when looking for care.

Mansanares adds that through this whole process, she’s had a complex range of emotions.

“I feel like the country is turning so many of us into second class citizens without a federal protection to this liberty and this freedom,” Mansanares said. “I feel a sense of disappointment that we've landed ourselves in a place where state politicians have so much authority over what happens for health care.”

But she’s also feeling hopeful. There’s a lot of work to do, and she wants Colorado to be a beacon of hope for people traveling long distances.

EB: Is there anything we should know about our local Planned Parenthood clinic in Glenwood Springs?

HZ: Yes, Mansanares says there are appointments available and depending on the type of appointment, wait times shouldn’t be more than a week at this point. And in Glenwood they’re providing all forms of health care including medical and surgical abortions. 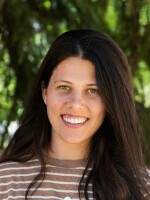 Halle Zander
Halle is an award-winning journalist and the All Things Considered Anchor for Aspen Public Radio. She has been recognized for her work by the Public Media Journalists Association and the Colorado Broadcasters Association. Before she began working full-time with Aspen Public Radio in September 2021, Halle was a freelance broadcast journalist for both Aspen Public Radio and KDNK. Halle studied environmental analysis at Pitzer College. She was an educator at the Aspen Center for Environmental Studies and at the Andy Zanca Youth Empowerment program, where she taught youth radio and managed a weekly public affairs show.
See stories by Halle Zander
Sign Up