Today is Monday, August 3rd.
Today’s the last Gotta Move! program of the season for kids 2-7 accompanied by an adult. Meet at 10:30 at the Bucksbaum Campus Administration Building and watch your children discover the basics of beat, tune and rhythm through stories, movement, and a short performance by AFMS students. Admission is free.

A free guided tour of the Bucksbaum Campus is offered today at 10:15, and at noon, a free guided backstage tour of the Benedict Music Tent and Harris Concert Hall.
This evening’s 6:00 chamber music program in Harris Concert Hall includes the Brahms Viola Sonata in F minor, Judith Shatin’s Glyph, and Faure’s 2nd Piano Quartet. The Brahms sonata was originally written for clarinet and was one of the last pieces Brahms composed before his death. The Faure piano quartet reflects some of the emotional turmoil Faure was undergoing at the time of its composition. In 1877, after courting her for five years, Fauré had finally become engaged to Marianne Viardot, daughter of the well-known singer Pauline Viardot. The engagement lasted for less than four months, and Marianne broke it off, to Fauré's considerable distress. It was in the later stages of their relationship that he began work on the quartet. 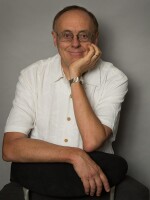 Chris Mohr
Summer classical music host Chris Mohr is coming back to Aspen. He has loved classical music since he was twelve. “And I owe it all to radio,” Chris explains. “I grew up in a farm town east of Cleveland. Most of the music I heard growing up was Herb Alpert and the Tijuana Brass, Louis Armstrong, Frank Sinatra, and other favorites of my parents.
See stories by Chris Mohr
Sign Up