Author Ted Conover is no stranger to Colorado.

He grew up in Denver and then wrote about his two-year stint in Aspen in his book Whiteout.

The immersive journalist's latest book also looks at Colorado, this time a very different part of the state.

In his new book Cheap Land Colorado, Off-Gridders at America's Edge, he writes about his experience over four years on the high plains of the San Luis Valley.

Conover spoke with Maeve Conran about his experience living in the San Luis Valley, the people he met there, and what makes the area so unique.

Ted Conover: So this is a part of the San Luis Valley, it doesn't even count for the whole thing, right?

People live off-grid on the sides of mountains there, and in places that cost more money, but this is real bare bones, cheapest land of all that is the middle of the valley and used to be ranches with subdivided in the seventies into five-acre lots.

For my first couple years I rented a corner of a family's lot, and then I bought my own and I'm still there.

So anyway, it is a hardscrabble, difficult existence where you are bracing yourself against the wind and the sun, and the cold especially is probably the toughest part in the winter months.

And then you have neighbors who are many times people without many resources and have needs and in a way you can bond over that, but it also makes people somewhat fearful of each other sometimes, like if they have a healthy marijuana plant that might fetch a thousand dollars, that's something you worry about when you leave home.

Or if you leave home, you know, whole trailers disappear out there.

But I met people I like and I bought right next door to them, so that sort of made it possible in my case.

But it's a world of people who are proud to own their own place, they hate paying rent, don't want to pay utility bills, and are ready to sort of take responsibility for their own wellbeing.

They, I think, prefer to live in a world where there's no government or people lording things over them.

So there's a real strong independence streak, but it's also really poor people, and if you saw them, that might be your first impression, not so much of a rugged frontiers person as a person with very little.

Maeve Conran: Now this is the second book you've written about a place in Colorado.

The other book (Whiteout) was in Aspen and you spent time there, the richest county in the state of Colorado, and in the top five richest counties in the country.

Given the current political climate, and growing inequality, and we're seeing how that then manifests itself politically, what have you learned from your experience in both places?

Ted Conover: So one interesting thing is, you know, nationally the wealthiest counties tend to elect Democrats and the poorest tend to elect Republicans, which is quite fascinating, right?

You would think that people would, if they were voting their pocketbook, and they were poor, they might vote Democratic, and I think that might be true in New York City where I live now, but somehow in the West and other parts of the country, it doesn't work like that.

And I think oftentimes people are voting their values, values of self-sufficiency that they think the Republican party embodies or embraces.

You know the valley has a strong Democratic streak, especially among older generations of Hispanic residents.

But the people out on the flats where I am tend to trend Trump and I think they are among those who feel left behind or looked down upon by city people.

I think there's a sense of stigma, right? Like (my neighbors) the Grubers, the parents don't have teeth and feel self-conscious about that.

And I think in a way they're more comfortable out of the public eye out there on the flats, than they might be living in a dangerous edge of some city.

So it's a solution for them and I think they're proud of the life they have fashioned.

It'll be interesting to follow their girls over the years because they've been homeschooled by parents who did not finish high school themselves, but who are really good parents.

You know, they really have a good family feeling and so it's a whole constellation of factors that I've never really lived among before.

And it's opened my eyes to a part of this country I wouldn't otherwise see.

Maeve Conran: And given that you have had that experience and have developed these relationships, and now you have a real connection to that area, do you have a sense of where we can go as a country to unite all of these different elements?

Ted Conover: I just think we need more ways to talk about things we have in common, whether it's our kids or our desire for healthy food or clean water, you know, it just seems so much now ends up in this chasm of our opposing social medias.

And I kind of feel I've stepped into the breach just to see who will talk to me and I think there's more room for that.

I'm not exactly sure how to orchestrate it, but I don't think, you know, things are as bad as cable news or our social media feeds would lead us to believe.

I really think we've been drawn apart by algorithms and grand standers, and I think we can do better.

Ted Conover will speak about Cheap Land Colorado at an event hosted by Aspen Journalism at the Albright Pavilion, 845 Meadows Rd., Aspen, on Thursday January 5. 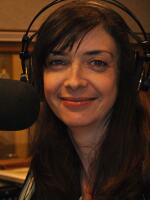 Maeve Conran
Maeve Conran has been working in public and community radio in Colorado for more than 15 years. She served as the news director at KGNU in Boulder/Denver until 2020 and has since been working as the Program Director at Free Speech TV based in Denver, as well as host/producer of the Radio Bookclub podcast and radio show which is a collaboration with the Boulder Bookstore.
See stories by Maeve Conran
Sign Up