Robert McNamara's son Craig McNamara talks about his book, 'Because Our Fathers Lied'

The late Robert McNamara, who was Department of Defense secretary from 1961 to 1968, is often described as “the architect" of the Vietnam War.

McNamara, who died in 2009 at the age of 93, had strong ties to Aspen and Snowmass Village.

He first visited Aspen in 1947, built one of the first ski-in, ski-out houses in Snowmass Village, and often brought his family, including his son Craig, here to ski and hike.

And he has written a book called “Because Our Fathers Lied: A Memoir of Truth and Family, From Vietnam to Today.”

Craig McNamara was in Aspen in August.

He talked about his new book, as well as his father’s relationship to Aspen and Vietnam, with Aspen Public Radio’s Brent Gardner-Smith. 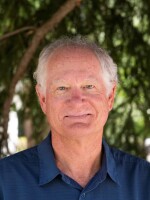 Brent Gardner-Smith
Brent’s journalism career includes working as a reporter at the Aspen Daily News and The Aspen Times. He also founded Aspen Journalism in 2011, and worked there as reporter, editor, and executive director until August, 2021.
See stories by Brent Gardner-Smith
Sign Up